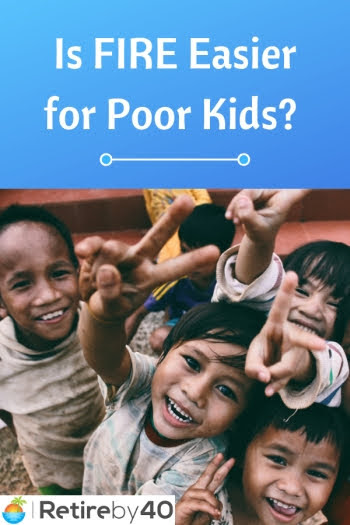 Have you read Quit Like a Millionaire by Kristy Shen and Bryce Leung (aka. Millennial Revolution)? I just finished the book and I enjoyed it tremendously. Quit Like a Millionaire is a great introduction to the modern FIRE movement. If you want to know more about financial independence and retiring early, this is the book to read. Kristy is the primary narrator and she shares her journey from childhood poverty to retiring a millionaire. Her story is quite fascinating, but it’ll make you cringe in some parts too.

Can this be true? I’ve always assumed that it’s much more difficult to become rich if you’re born poor. Poor kids have a lot of problems to overcome. Everything has to go right for them to escape poverty. 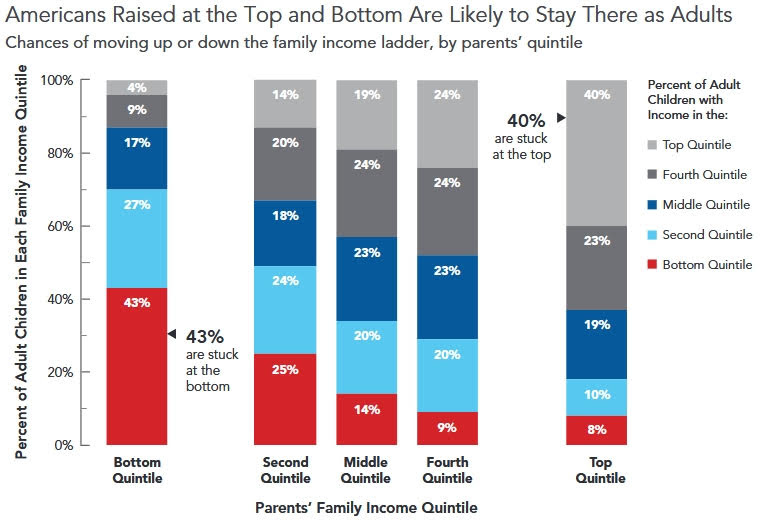 According to a 2012 Pew Economic Mobility Project study, only 4% of those raised in the bottom quintile moved up to the top quintile as adults. 43% of poor kids grow up to be poor adults. This makes sense to me. It’s much easier to earn more when you have advantages like private education, family connections, and wealthy friends.

At first glance, it seems the statistic contradicts Kristy’s observation. She said childhood poverty is quite common among the millionaires she met. Common? How can that be?

After thinking about it more, I think I can explain it. The key here is that income doesn’t equal wealth. Also, Kristy is active in the FIRE movement. The FIRE millionaires are a bit different than normal.

Unfortunately, most families spend most of the money they make. The household saving rate in the US is 6%. It’d take a very long time to become a millionaire if you save just 6%. The median household income in the US was $61,372 in 2017. It’d take over 270 years for this family to become a millionaire household. A 6% saving rate is just too low. I assume they just save the money in a checking account. If they invest it, they will have a million dollars in about 40 years. That’s still a very long time.

Anyway, that’s why most people aren’t millionaires. They spend too much and don’t invest enough.

Of course, there is a correlation between income and wealth. It is way easier to save if you make more income. Kristy and Bryce were in the top quintile by the time they were 30. They saved over 50% of their salary and became a millionaire household in less than 10 years.

Personally, I think Kristy was very lucky to be part of the 4% that moved from the bottom to the top quintile. Her family was poor when she was young, but she overcame it with education and perseverance. Yes, it’s possible to become a millionaire when you make less, but it will take a lot more time.

It is possible to become a millionaire even if you don’t make a lot of income. But it is way easier if you make more money. Intuitively, millionaires must be more common as you move up the income quintiles. However, Kristy believes childhood poverty is a common experience for many millionaires. There is a discrepancy here.

This is when I realized “common” has a different meaning for Kristy and me. To me, common means looking at a sample of all the millionaire households in the US. In this case, relatively few millionaires experienced childhood poverty because the socioeconomic mobility in the US isn’t that great. Only a small percentage of people with childhood poverty become wealthy. I mean how many janitors have $8 million? Probably just one or two.

However, common has a different meaning to Kristy. Kristy and Bryce are outspoken advocates of the FIRE movement. In this circle, millionaires are dime a dozen. Most (if not all) FIRE bloggers who retired from their career are millionaires.

Yes, we’re one of those FIRE millionaires, too. We use the 4% safe withdrawal rate as a guideline. That means we had to save up at least 25 times our annual expense before considering early retirement. Most people save a bit more so they’d have some margin. Anyway, the target number for early retirement is usually over a million dollars. Hence, millionaires are somewhat common in the FIRE community.

My theory – millionaires in the FIRE community figured out what “enough” means. My parent was in the lower quintiles for many years. Our modest lifestyle is luxurious compared to my childhood. I could work longer to have a bigger spending budget, but that’s not important to me. My life is already very good. More spending isn’t going to improve it much. I’d rather have more time and autonomy. That’s why I’ve been retired for 7 years. Childhood poverty set a low baseline for me.

In contrast, regular millionaires have higher ambition. Once they have a million dollars, they’ll shoot for two. After they have two million, they’ll aim for 5. More money means more spending for most people. I think it’s much harder to retire early with that kind of mindset. That’s normal.

That’s just my opinion. Now, it’s your turn. Do you think FIRE millionaires are different than regular millionaires? What’s the reason? I’ll send a copy of Quit Like a Millionaire to the comment I like best. Good luck!

Alternatively, you could get a copy of Quit Like a Millionaire from Amazon and donate it to your local library once you’re done with it.

Disclosure: Amazon link above. We may receive a referral fee if you purchase something.

The post Is Financial Independence Easier for Poor Kids? appeared first on Retire by 40.