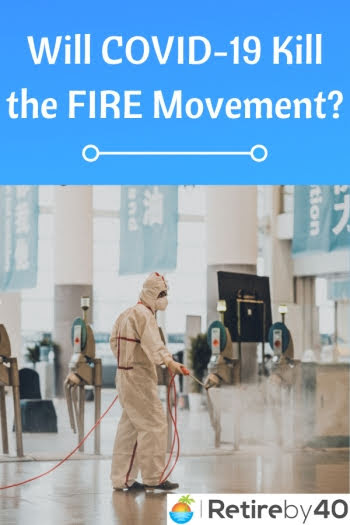 Hey everyone, how are you holding up? It’s been 15 days of lockdown for us in Oregon. The RB40 household has adjusted relatively well. Mrs. RB40’s office is closed and she is working from home. She isn’t as productive, but we all have to lower expectations in this trying time. The only issue for her is back pain from sitting at the dining table all day. Our bench is not ergonomic at all. I ordered some furniture and we’ll set up a better working area for her soon. As for RB40Jr, he loves the extra time off from school. He misses his friends, but he’s very happy with the school closure. Me, I’m so ready for these two to go back to work/school. I need some space! (Only half-joking here…)

I know we’re very lucky compare to many families. We are financially independent and we don’t have to worry about how to pay the bills. There is some good news for regular families. The federal government passed the stimulus bill and everyone should receive some financial relief soon. Also, 2020 will be a challenge for the FIRE movement. My blog traffic dropped way down in March. Lots of people are working from home, but few want to read about early retirement right now. We have too many other things to worry about.

Over the last few weeks, the stock market crashed and took everyone’s portfolio along with it. This is a big setback for anyone looking to retire early. It’ll be a big challenge for us too. My main goal for 2020 is to generate enough passive income to cover our living expenses. This goal will be difficult to achieve in the economic meltdown. Even if I include my blog income, it might not help much. Let’s hope we can bring Covid19 under control by summer. That will give everyone a chance to catch up financially. Anyway, this is a good test for us. If my early retirement can survive this 2020 recession, it can survive anything. What about the FIRE movement? Can it survive Covid19?

FIRE is easier during good times

The FIRE (financial independence, retire early) movement has been getting more popular over the last several years. When I started blogging in 2010, there were only 3 early retirement blogs. Now, there are hundreds of blogs and frequent media coverage. However, the last 10 years were extraordinary. The longest bull market in history made every investor look like a genius. If you save and invest, your net worth increase every year. FIRE seems like a reachable goal if you live modestly and minimize lifestyle inflation.

Now, the economy is imploding and FIRE doesn’t look so hot. Most people are more concerned about keeping their job and health insurance. I retired from my job in 2012 so our portfolio benefited from the long bull market. For now, we’re still way ahead of where we were when I retired. What about people who retired recently or plan to retire soon? Will they be okay with the pullback? I reached out and got some feedback from a couple of FIRE bloggers.

Retired early a year ago

Let’s hear from Jim from Route to Retire. He retired about a year ago and moved to Panama with his family.

I think we’re in good shape overall to weather this downturn.  Financially, we were prepared for the economy taking a turn for the worse.  We have 1 year’s worth of living expenses in cash and another 5 years in a bond fund ladder.  That gives us about six years of time for the economy to get back on track – otherwise, we might need to adjust our plans along the way.

There were two things we weren’t prepared for though.  One was the cause being a pandemic.  When this hit, we had to figure out a game plan because we’re living in Panama right now and ways in and out of the country started closing quickly.  We had only a couple of days to decide if we should take the risk and stay here as foreigners in another country or take another chance and get on three different airplanes back to the U.S.  After a lot of discussions (and arguing), we decided to stay here in Panama.  So far so good.

But the other effect I’m concerned about is our rental property.  We own a duplex in Ohio and we were already having problems with a tenant on one side not paying.  Our property management company was just starting the eviction process when he came up with most of the money.  Now, however, we’re in a position where landlords can’t (or shouldn’t) evict tenants.  I already reached out to our property management company a few weeks ago and told them to work with our tenants on both sides regardless.  The problem is that if the tenants can’t pay rent, I still need to make the mortgage payment.  If I need to, I know I can probably get a forbearance, but I don’t want to go down that path if I can help it.

It sounds like Jim was prepared so he can handle a recession. That’s great. Cash is king when the economy turns south.

A Purple Life plans to retire later this year. Everything was going smoothly until recently. Can she still retire early with this recession?

I am still planning to quit my job in September of this year. While a global pandemic and market crash was not what I envisioned my last year of work to include, I’m still comfortable with my plan. Financially I will have 2 years of spending in cash so I won’t even need to touch my portfolio until the fall of 2022.

The only situation I can see where I would not quit in September is if life looks exactly as it does now – quarantines, closed borders and social distancing. If that’s the case and I will just be sitting at home anyway I can see staying at my remote job a few more months until I can have the friends and travel filled retirement I was imagining.

My September timeline was originally born based on my net worth projections and travel I have already booked to Australia, New Zealand and Argentina. However, if the world looks as it does now those plans will obviously need to be pushed back a year or two. Luckily I have travel insurance and an entire lifetime to reschedule! Overall I’m surprised with how little my plans need to change as a result of everything that’s happening the world right now. A few trips might be postponed, but basically I’m still full steam ahead.

That’s great! Having a sizeable cash cushion is the key to surviving a recession. She’s writing a whole post about her plan and I’ll link to it when it’s live. My only suggestion is to engineer a layoff instead of quitting. However, she said her industry doesn’t give a severance package so it won’t work.

FIRE will come roaring back

It’s great to hear my fellow FIRE bloggers are doing so well. However, I imagine a lot of people are discouraged right now. That’s understandable. We’re all dealing with too many big problems right now. It’s okay to hit the pause button for a while. Your portfolio took a hit and early retirement looks more daunting than ever. However, we can learn a lot from this experience too. Now we know a solid cash cushion is essential. These days, we have about 3 months of emergency fund. That’s okay because my wife is still working. Once she retires, we’ll beef our cash cushion up to at least 1 year and have some bond ladder behind that. That’s life. We need to keep learning from our experience. Let’s all hope this recession will be a short one so we can all bounce back soon. Your retirement fund should survive the stock market crash as long as you don’t panic sell.

Another reason why I think the FIRE movement will survive is how employers behave during a recession. Now, workers are realizing their employers aren’t their friends. One of the reasons I wanted to retire early is the way my old employer treated the workers. During the last recession, I survived many rounds of layoffs and many of my friends didn’t. My old manager was let go a week before Christmas so they didn’t have to pay him the annual bonus. Ouch! That woke me up. I realized can’t depend on a corporation to take care of me forever. Employees are the first to pay the price when times get tough. After that, I saved and invested as much I could to build a passive income stream so I don’t have to depend on an employer. I suspect most readers here still have a job, but that’s going to change if this recession drags on several more months. You’ll realize everyone is replaceable and no job is safe. Build up a cash cushion now while you still have a job.

What do you think? Will Covid19 kills the FIRE movement? Is this pandemic strengthening your resolve to achieve financial independence or scared you off completely?

Let me know in the comment if you have a post about this and I’ll link to it.

The post Will Covid19 Kill the FIRE Movement? appeared first on Retire by 40.